The renewable natural gas (RNG) offloading station at Dane County’s landfill is scheduled to receive its first load of biogas this week.  The biogas will be brought from a Wisconsin digester that collects the methane from manure which reduces greenhouse gas emissions and harmful runoff to lakes and streams.  The digester’s biogas will be injected through the County’s equipment into the interstate transmission pipeline so it can be used as renewable fuel, powering fleets of RNG vehicles locally and across the United States.

“We are thrilled to reach this milestone at the Dane County landfill,” said County Executive Joe Parisi.  “It took a lot of hard work and dedication from our staff and industry partners to see this through to the end. It is exciting to see this effort shape the industry. We look forward to the positive impact it will have on our clean lakes efforts, as well as the local economy.”

Agriculture accounts for 30% of the total emissions of methane, a naturally occurring greenhouse gas (GHG), which is 25 times more potent to the atmosphere than carbon dioxide.  When used as renewable vehicle fuel, every trailer that comes through Dane County’s offloading station will reduce GHG emissions equivalent to that of burning 24,000 pounds of coal.

The RNG offloading station, the first-of-its-kind in the nation, was part of a larger project to process the County’s landfill biogas for pipeline injection.  Traditionally, each biogas producer is required to make a physical connection to the pipeline which can cost millions of dollars for piping installation, equipment, and connection fees.  Since the County was already making that connection for the landfill biogas project, an offloading station was added for other biogas producers to use.  This revolutionary project reduces the barriers for biogas producers to gain access to the pipeline, renewable energy markets, and the U.S. Environmental Protection Agency’s (EPA) and state issued renewable fuel credits.

Due to the increased revenue opportunities for local digesters, this offloading station is expected to create an economic incentive for owners of “Cow Power” facilities to convert their operations to vehicle fuel production, which will spur the development of more digesters in our area, and significantly increase Dane County’s lakes clean-up efforts.

This offloading project was part of the 2018 budget and cost approximately $5.5 million for design, permitting, and installation.  The EPA has oversight on renewable fuel pathways, and with this project, the County had to provide reassurance that the proper equipment, controls, and documentation were in place. Users of the offloading station will be charged a fee to pay back the costs of installation and fund the operation of the facility.  Price incentives are available for digesters in the Yahara watershed who participate in advanced phosphorus removal to further help incentivize cleaning up our lakes.

The County has come to agreement with multiple biogas producers and offloading is expected to ramp up this summer.  Dane County has the capacity to unload approximately 20 million gallons of gasoline equivalent per year.  “There has been tremendous interest and response from biogas producers looking to use our offloading station,” said Dane County Department of Waste & Renewables Director John Welch. “We also get calls from other facilities around the nation who are interested in installing their own offloading equipment.  We are thrilled that we can help make a positive change and advance the industry.”

Photo 1 Caption:  The offloading station was part of a larger project to process the County’s landfill biogas for pipeline injection.

Photo 2 Caption:  Biogas is produced at Wisconsin digesters and brought to the offloading station for injection into the pipeline.

Photo 3 Caption:  Dane County Department of Waste & Renewables engineer, Ali Rathsack, finalizes programming the controls at the offloading station.  County staff and industry partners worked diligently to demonstrate that the proper controls and protocols were in place to meet the rigorous requirements of the U.S. EPA’s renewable fuels standards. 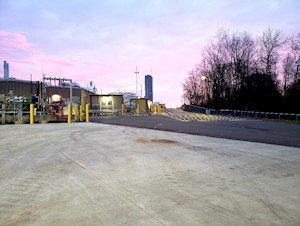 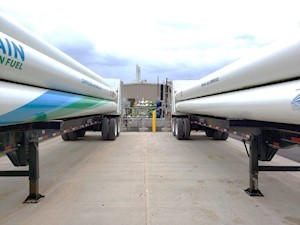 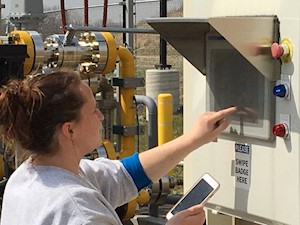